Who Is Influencing Who? And To What End? 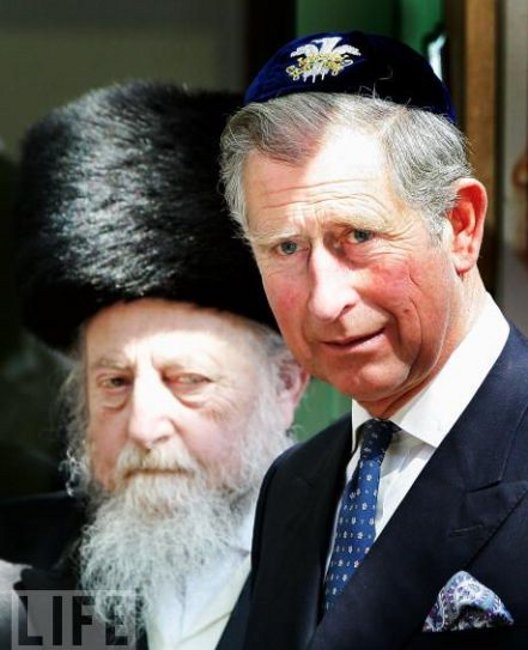 Note that he is wearing his Royal Kippah (Yamulke). Why would any heir to the British Throne agree to wear a Jewish Yamulke? And why visit Krakow just to open a Community Centre?

Note also the attire of the Jewish character standing in the background. That ridiculous headgear does not belong in Europe. Its true roots lie in the Pontic Steppe region. It is Turkic … not ethno-European.

One Facet Of The ‘Jewish’ Hoax

From a genetic perspective, the vast bulk of all so-called ‘Jews’ – worldwide – have nothing whatsoever to do with those ‘Jews’ we have been brainwashed into believing existed at the time when ‘Jesus’ is supposed to have existed.

They are not ‘Semitic’ in any way, shape, or form, except that they have purposely adopted a Semitic language — Hebrew — as their official lingua franca. In other words, it is a ruse and NOT an historical fact.

You have no obligation to tolerate those who attempt to use “anti-Semite” as an epithet. Stop being intimidated by this completely bogus term. Respond by turning the tables. Demand immediately that they explain exactly what “anti-Semitism” is supposed to mean … in their eyes of course. Demand also that they clearly identify who these Semites are, and why. And insist they give you their sources.

You will quickly find that they cannot; that they will truly struggle to sound coherent.

Respond further by suggesting they are probably suffering from a serious mental infirmity, or a grand delusion imposed on them by the mass media machine that daily attempts to remould or reconfigure the brains of the unwary. Ask them politely to stop playing school-yard games by always calling people names — especially through the overuse of abstract terms — instead of debating facts and reliable evidence like any healthy adult is supposed to do.

What passes for Judaism today is essentially a false identity whereby something that pretends to be a religion is being used as a curtain, veil, or mask to hide a vast, and wealthy, global criminal enterprise. It is headquartered in London, England … and its principle sponsor and ‘spiritual’ leader is whoever happens to be the male head of the Rothschild family in any given generation. The English branch of the Rothschild octopus is the 200 year long private owner of the British Isles: its people, industries, and practically all the financial institutions that were set up to use Britain as an offshore base.

Look again at the picture featuring the “Prince of Wales”. Look closer at the character behind him, wearing the oversized fur hat.

Over 80 percent of Europe’s so-called ‘Jews’ are ultimately of Turkic genetic stock. As such, they are an alien throwback to the protracted Hunnish incursions into Western Europe, that mixed with the far more virulent Mongol invasions that once threatened all the Germanic peoples of Europe, several centuries later.

The Huns first appeared (from somewhere in Central Asia) to the north-west of the Caspian Sea in circa CE 370. Between the years 420 to 469 CE, the Huns caused havoc across the east-west landmass that stretches from the rivers Volga (in the East) to the Rhine (in the West).

After finally being repulsed by the Western Roman Empire, they began their slow dissolution from the historical record. Their most decisive defeat was actually at the hands of a confederation of Germanic tribes under the leadership of Ardaric: refer to the Battle of Nedao (CE 454). Those Hunnic forces who managed to survive this onslaught fled east as far as the Black Sea region.

One genetic strain of the Huns eventually settled in central Europe to form — alongside the Magyars — the country we know today as Hungary. While another strain settled further to the east and thus kept in regular contact with Khazaria (whose empire overlapped an area that is now Southern Ukraine).

It is this latter group who (likely) converted to a particularly virulent form of “Judaism” around the same time of the Khazarian conversion: in the 8th century CE. This might help explain why Hungary, prior to the 1930s, was home to one of Europe’s highest concentrations of ancient Turkic ‘Jewish’ populations.

The sudden Mongol expansion westwards across the great grasslands of Central Asia, commenced in 1206 CE. By 1279 they had reached the Baltic Sea, Turkey, and Romania. All central European states trembled as their leaders and peoples anticipated mass attack and butchery. During this same period, rampaging Mongols ransacked (and took possession of) much of China, and Persia, while laying waste to Baghdad.

Central Asia’s political landscape — Kazakhstan, Turmenistan, Uzbekistan, Afghanistan, etc. — was utterly transformed (and essentially established) by this expanding wave of Mongol belligerence. Whatever was left of the Khazar Empire was swept away by the Mongols; or alternatively, the ranks of the Mongols were opportunistically swollen by the adoption of Khazar volunteer troops (birds of a feather, flock together).

The Mongol menace dissipated, of its own accord, due to internal dynastic stresses that were built-in to their centralized Khanate structure. A residual population of occupiers then settled down within the northern reaches of the River Danube, Black Sea, Caspian Sea, and the entire Caucasus region. These ad hoc collection of ex-marauders became known as the “Golden Horde”.

This “Horde” threatened any populace within range … mostly with the intent of extracting taxes or tribute. Their menace lasted from the mid-13th to the end of the 16th century. Two isolated pockets denoted by the Crimean Khanate and the Kazakh Khanate, persisted until 1783 and 1847 respectively. 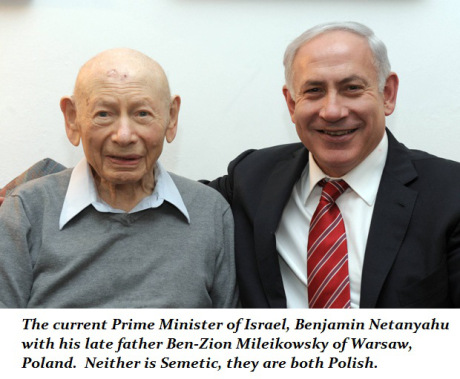 The caption in the above image — one that clearly reveals the Asiatic/Mongol features in Netanyahu’s father — is meant to mislead. The ‘Jews’ of Poland are not Polish in the true sense of the word.

Over the centuries, they have repeatedly shown themselves to be paranoid, psychopathic, hostile aliens who belong somewhere on the Steppes of Central Asia: not in Western or Central Europe. Yet they actually constitute most of the current political elite of the “State of Israel” … and have done so since 1948.

It is the descendants of such distant Turkic tribes — now calling themselves ‘Jews’ — who Britain’s “Prince of Wales” went to grovel to … when he traveled to Krakow, Poland, in April 2008. 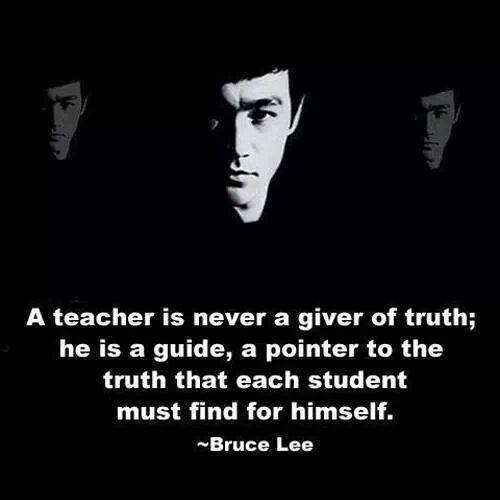